I’ve been trying to make the Azure Stack Proof-of-Concept (Preview 2) run on VMware and here is what I found.

First of all, the documentation to set this stuff up can be found here: Deploy Azure Stack POC

As I currently run VMware in my lab and didn’t want to re-install the physical server, I tried to get the Azure Stack up and running in a VMware VM. Following the recommendation for sizing, I created a VM with 100GB of RAM, 24 vCPUs, one vNIC and 5 hard disks with 200GB each. The many vCPUs are actually not necessary, as the hardware check does fail even though enough cores should be available. More on that later.

Additionally, I did enable the “Hardware virtualization” feature in the VM’s CPU settings. You can do this using the vSphere Web Client or use the following quick-and-dirty PowerCLI function for it:

As the Virtual Machine will run Hyper-V and some guest VMs, we have to disable the security features on the virtual Port Group where the VM is connected to:

The next step is to install Windows and the VMware tools, download the Azure Stack TP2 support files (see documentation link above) and copy the CloudBuilder.vhdx file to the root of the C drive of our VM. Then I started .\PrepareBootFromVHD.ps1 -CloudBuilderDiskPath and was confronted with an error, stating “The server is currently already booted from a virtual hard disk…”

Fortunatelly, the fix is easy: Open the PrepareBootFromVHD.ps1 file and find the following section:

Now either remove the section or just remove the Exit. That way, it will still display a warning but no longer stop the execution of the script.

Again, start .\PrepareBootFromVHD.ps1 -CloudBuilderDiskPath which should now succeed and prompt for a reboot of the machine.

The VM restarts and boots from the CloudBuilder.vhdx file with the typical OOBE asking for an admin password and the product key. Once set, startup continues and we can log-in to the VM. At this point, we’ll have to install the VMware tools again. The next step is to initialize the additional hard disks for the machine. The disks must be “empty” so do not create any volumes. I just run Get-Disk | Initialize-Disk and move on.

Now the documentation wants us to open an administrative PowerShell console, change into the C:\CloudDeployment\Configuration folder and run the installation script. As a few checks are built-in to prevent this kind of setup (and verify hardware resources) this will fail with the following error message:

So the two tests that failed use the following CIM Instances (WMI) to query information about the host system: Win32_ComputerSystem, Win32_Processor Now even though I did configure 24 vCPUs for my VM, the NumberOfEnabledCore attribute of Win32_Processor shows a value of “0”.

Here too, there’s an easy fix: Find the BareMetal.Tests.ps1 file in the C:\CloudDeployment\Roles\PhysicalMachines\Tests directory and make the following tests pass:

Again, we could just remove the actual test (the expression inside the It {} statement) or make it a comment or modify the code to make it pass. I ended up with the following, slight modification:

By the way, you’ll see that this script is signed, so in order to make it run, remove the signature and save the script.

Now we can go ahead and invoke the install script to actually install Azure Stack inside the virtual machine. As there is no DHCP Server available in the network into which I’m deploying, I specify a few options when invoking the installation script:

Note that this script has a rerun parameter, so if execution failes, it can be invoked again and will continue where it left off:

Note that at some point of the installation, the VM is rebooted and logged in automatically to the account “azurestack\azurestackadmin”. From that moment on, all installation related tasks (such as a -Rerun) should be performed using this account.

I did stumble over another prolem, installation stopped with the following error:

Apparently the default value of 500 for MaxEnvelopeSize is not enough, I used the following command to increase the size to 8192:

Once the InstallAzureStackPOC.ps1 script finished running, there will be 13 VMs running on our “Host VM”, consuming about 52GB of RAM:

If you encounter problems during installation, make sure to check the summary.log.xml file in C:\CloudDeployment\Logs.

To actually log in to the Azure Stack Portal, open the MAS-Con01 VM’s conole and find a link to the portal on the desktop: 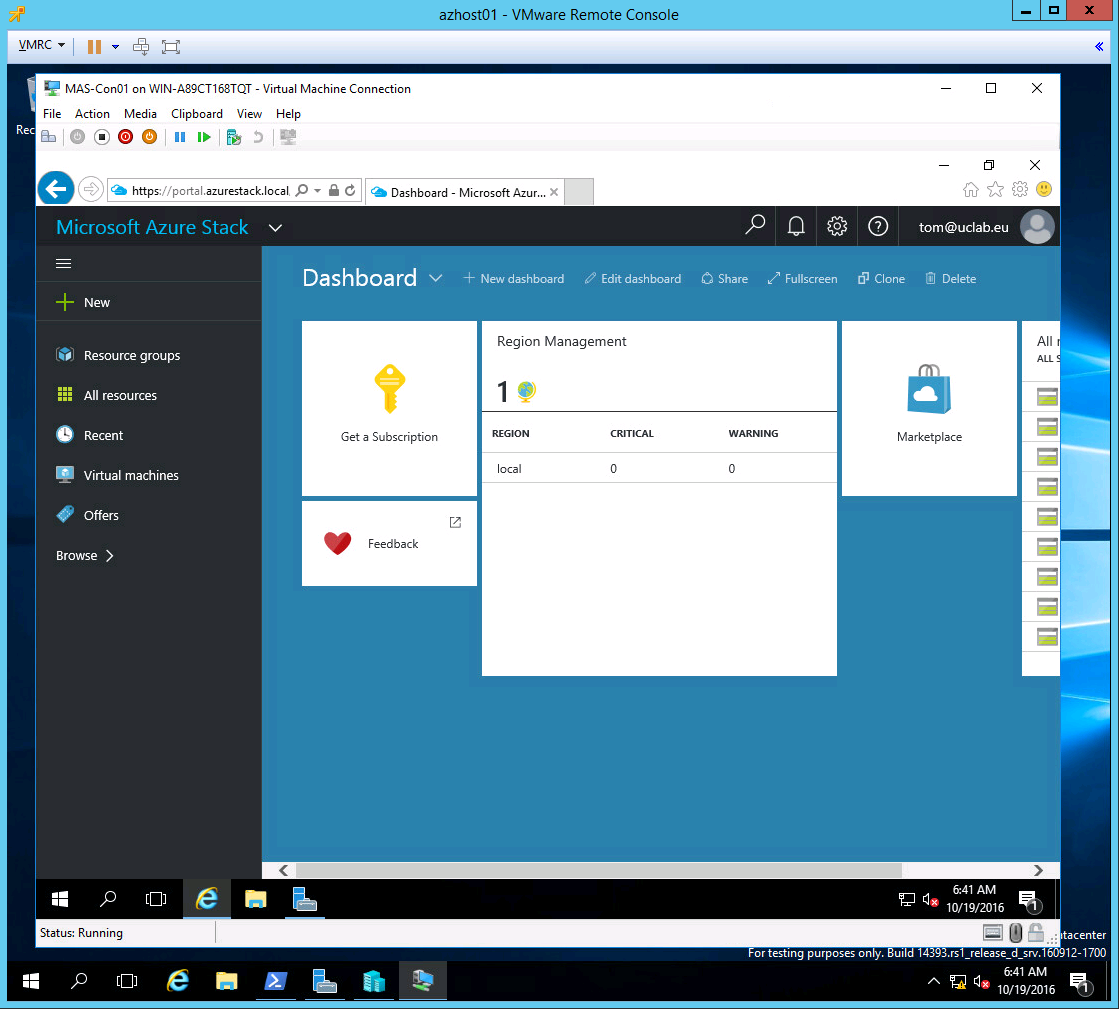 Ok, so with that: Have fun with Azure Stack and happy hacking ;)