This is the first post of a series about building a hyper-converged solution with Nano Server in Windows Server 2016 Tech Preview 4. Over the next weeks, I’m going to cover the following parts of my journey:

Before we get started, my quick introduction to hyper-converged, just in case you’ve never heard about it. The basic idea is to bring storage closer to the CPU and so minimize delay. This is achieved by creating groups of servers with local discs and, through the magic of software, pool all the disks into volumes that span the entire group. Such a solution does offer some benefits when we think about scale: adding nodes to the cluster gives you more storage as well as more processor/memory capacity. Obviously we will also see some interesting problems introduced by the complexity of said solutions where troubleshooting will require a great deal of knowledge in multiple fields. While in the old days we had storage, network and compute as cleanly separated silos, hyper-convergence brings all of that together.

So, what I’m going to build and test in this lab is cluster of four Nano Servers running Storage Spaces Direct as well as Hyper-V. The local disks of all Nano Servers will be used to create a virtual disk, that will then be used to store the virtual machines.

In the first parts of the series I will build the solution using virtual machines, it’s all about proof-of-concept and learning the basics before getting access to lab equipment. Later I’d like to apply the topics and test the setup on actual hardware, measuring performance data and pulling some disks :)

The requirements for my lab are quite simple, I need an Active Directory domain, one 2016 TP4 Server where I can build and deploy the Nano Server images and later manage the cluster, and four VMs that will be running Nano Server.

I took to visio for a quick diagram, kindly think of the database symbols as disks: 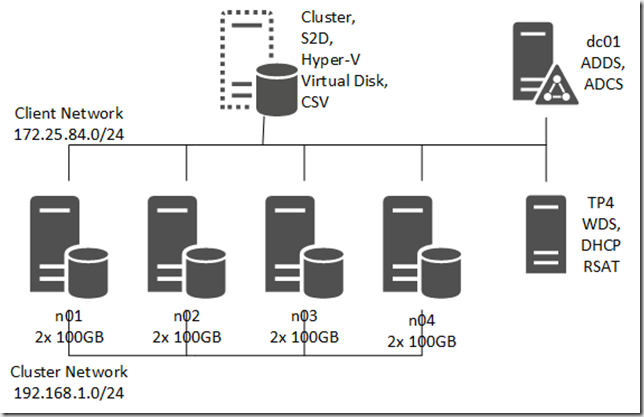 So in the first post of the series, I’m going to build the Nano Server images and deploy them to my virtual machines using Windows Deployment Services.