In my last post I went through the required configuration steps on the Cisco Unified Presence Server, in this post I will cover the Lync Server configuration as well as some troubleshooting aspects.

After that we need a static route pointing to the CUP Server so that Lync knows where to find Users within a certain address space (@tomt.local in our case).

Note: As we are using TLS as transport protocol, we create a new TLSRoute, the destination parameter specifies where requests for a certain domain (MatchUri) are routed to, as always with TLS, the common name of the certificate must match the FQDN entered as destination. I am using Port 5062 because that is the default port for the “Peer Authentication Listener” on CUP.

Nice work, Lync users can now see Cisco users presence states and they can even chat with each other :) 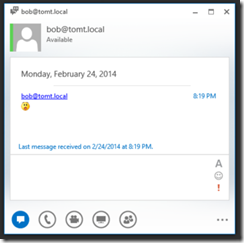 Ok, now that we have a working configuration, let’s have a look at troubleshooting.

Note: This post is in progress, I will add more troubleshooting steps over the next couple of days.

I will list some of the more problematic points here, so just in case you have a half working configuration, make sure to check for the following issues:

If the Lync Server certificate does not include the Enhanced Key Usage of “Client Authentication”, the TLS handshake fails. As the error occurs before the two systems are speaking SIP, we will have to rely on NetMon or Wireshark to troubleshoot the TLS Handshake, sure enough it shows an “Encrypted Alert”:

In the Binary data of the handshake we can see the alert value is 2B (hex) which translates to decimal 43 an means: unsupported certificate.

Lync Client signs out when searching for federated user

This is one of the oddest behaviors of the Lync 2013 clients that I have ever seen. A Lync user searches for another user which is homed on the Cisco Unified Presence server. As soon as the user completes the entry of the sip address (and the Lync Server sends a SUBSCRIBE message to the CUPS) the Lync user is signed out of the client.

Same thing happens if a CUPS user sends an IM to the Lync user. The Lync client log shows that CUPS is trying to do MD5 authentication (yes md5 in 2014….) and that the Lync Clients handles this by signing out.

Check the ACL configuration on the CUP Server, all Lync Servers and Clients must be excluded from MD5 authentication. Also check that your static Route on Lync points to the Peer Authentication listener.