In this episode of our little series on migration we are having a look at the URL structure of Jekyll and some of the less visible stuff that was associated with the old ntSystems.

Additionally we moved from https-enabled to https-only and the usage of a www. hostname was not defined. So all of those URLs would have worked on the old blog:

You see, it was a mess. On the current version of ntSystems, only the following URL will work:

But what about existing links from social media, other blog posts, or where ever else, you ask? Well the solution is twofold. First, enter…

We have been using Cloudflare for a while to easily enable IPv6 and and https even for our old blog. Now another feature, Page Rules, comes in very handy indeed. In fact a single rule is enough to get rid of the .aspx extensions: 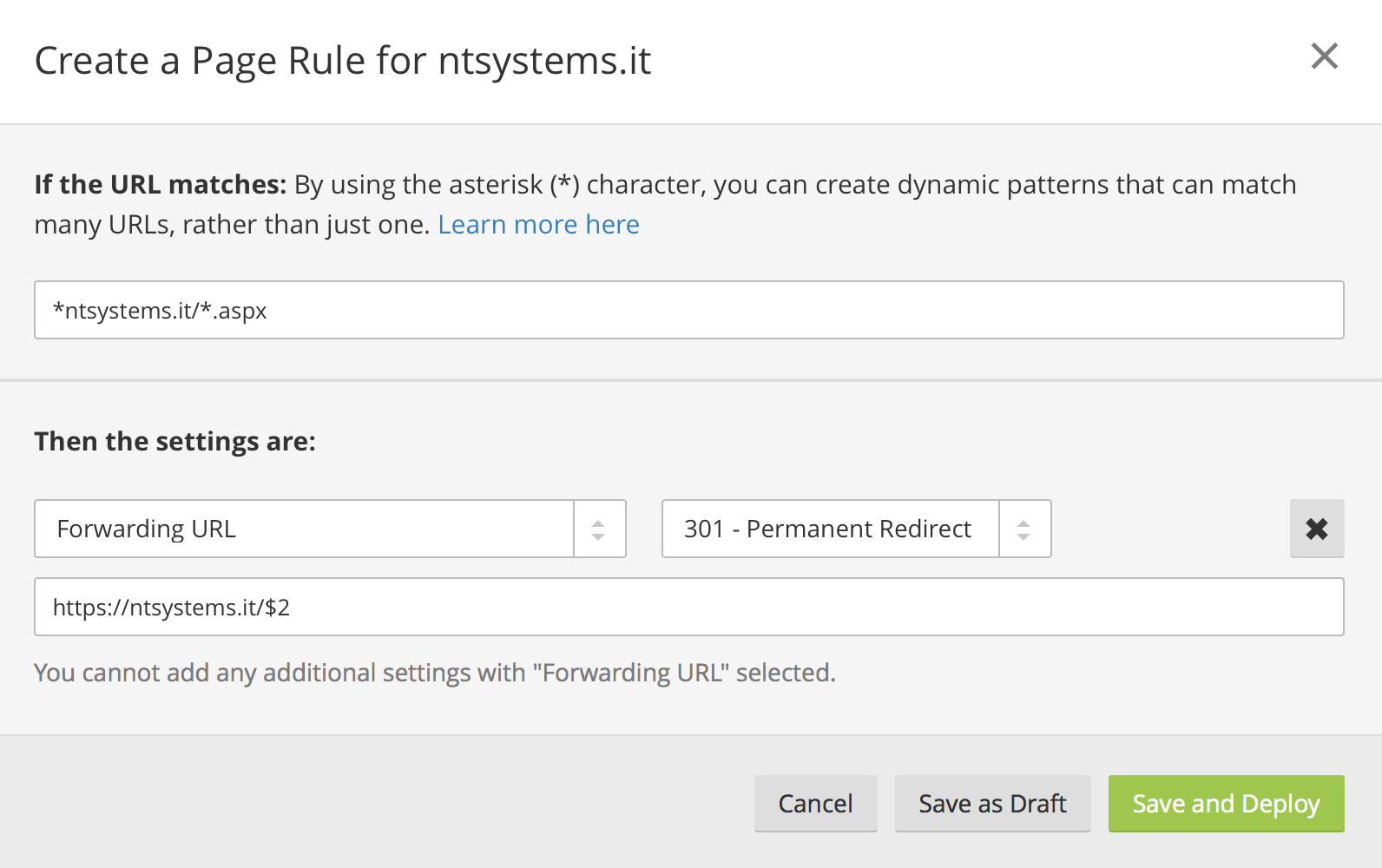 If the URL matches *ntsystems.it/*.aspx forward the request to https://ntsystems.it/$2 where $2 is the stuff that was matched by the second asterisk * in the matching pattern. Easy enough!

The second part of getting URLs right is instructing Jekyll to make them the same as before, without .aspx. And it turns out, that’s not to hard, either:

The following setting in our _config.yml file tells Jekyll to build all posts in the /post/ directory.

The title property was copied into the front matter by the script we used to migrate the posts. Quite ready, but not yet.

We still have to deal with the uppercase/lowercase filenames in the URLs. We ended up using JekyllRedirectFrom to work around that. We just added the 'jekyll-redirect-from' gem to our Gemfile and used the migration script to add an uppercase version of the filename to the front matter like this:

BlogEngine used a number of .axd scripts/handlers as endpoints for things like the RSS feed, the sitemap file, or a metaweblog extension. Obviously, the /syndication.axd URL does no longer work on Jekyll, a simple /feed.xml file is used instead. I tried various redirection methods but found that RSS clients (like The Old Reader) ignored them and the feed would go dead.

The URL of the sitemap.axd file is less important as it’s only used by search engines and not by users. So we just created a new sitemap.xml file and pointed the search engines to this new file. Additionally, we updated the Sitemap property in our robots.txt file.

Well, and that’s it for today. Happy Halloween! :) Tom