Some days ago, on September 30, @tmyerson and @joebelfiore introduced Windows 10 and announced the availability of a Technical Preview. The announcement and some demos are on YouTube. Some interesting new features such as snap for 4 windows and continuum, which switches between the start menu and the start screen based on whether or not a keyboard is connected, are coming to Windows 10.

The preview can be downloaded at: http://windows.microsoft.com/en-us/windows/preview

Along with the tech preview of Windows 10 came the preview for the next version of Windows Server. A ton of new features will come to the next gen server OS, a notable one might be the SDN controller role, which provides a interface between higher layer applications (think SCVMM) and the software defined networking stack in Windows.

The preview for Windows Server can be downloaded at: http://technet.microsoft.com/evalcenter/dn781243

The long rumored and previously shown “Office Graph” aka “Oslo” has started rolling out to Office 365 customers under the new name: “Office Delve”.

To get a chance to test new features before regular users get them, one needs to enable “First Release” in the Office 365 Admin Center. 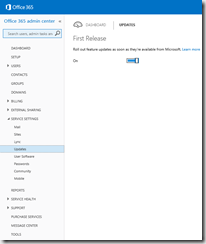 Another addition to the Office family, by the name of “Sway”, started a limited preview a couple of days ago. More information and some demos can be found here: https://sway.com/

After signing up some time ago, I finally received an invite for https://keybase.io. Keybase is an interesting approach to make public key cryptography more accessible to users, among many other features it provides  a simple way of finding someone’s public key, based on their social media and web identities, in order to be able to encrypt messages for them. It is available as a command-line tool but the website works as client, too.