I’ve recently stumbled upon coinhive and with all the recent fuzz about crypto currencies, I decided to have a look at it. So what’s that all about?

Many crypto currencies rely on a https://en.wikipedia.org/wiki/Proof-of-work_system algorithm in order to verify transactions. There are quite a few different algorithms out there, some of them more difficult than others. Bitcoin for example uses hashcash which, at current difficulty levels, can only be feasibly generated on specialized hardware (ASIC).

Another one of those PoW algorithms is CryptoNight which has been designed to be ASIC resistant and can feasibly be generated on modern CPUs and GPUs. Monero, a private and censorship-resistant digital currency, happens to use the CryptoNight algorithm, which means it can be mined efficiency on consumer devices.

That’s what the coinhive miner does. It essentially runs a JavaScript application in the users web browser and uses the devices CPU to mine Monero. The mined Monero will then be payed out to a wallet we own.

Now as this website is a side-project and does not make us any money at all (and we don’t like Ads), we decided to test drive coinhive for a week.

Starting today, by visiting our side your device will be used to mine Monero and, by doing so, help us maintain the site and deliver more awesome content.

After the first week’s trial we will publish the stats and discuss the ethics behind “abusing” our visitors spare CPU cycles.

The following code has been added to the site’s footer in order to start the miner:

After one week of testing here are the results of this little experiment. This site has between 300 and 600 active users on a given day, not a lot but it’s something. So with the above code, we are using up to 90% of the visitors CPU cycles to generate Monero using coinhive’s JavaScript miner.

This resulted to be about 468 hashes per second totalling about 173.82 million hashes in a week. According to monerobenchmarks.info, these figures can be compared to what a not-very-modern GPU with 4GB of memory would produce.

The final balance after the weeks test is 0.02582 xmr, worth about 2€ at the time of this writing. 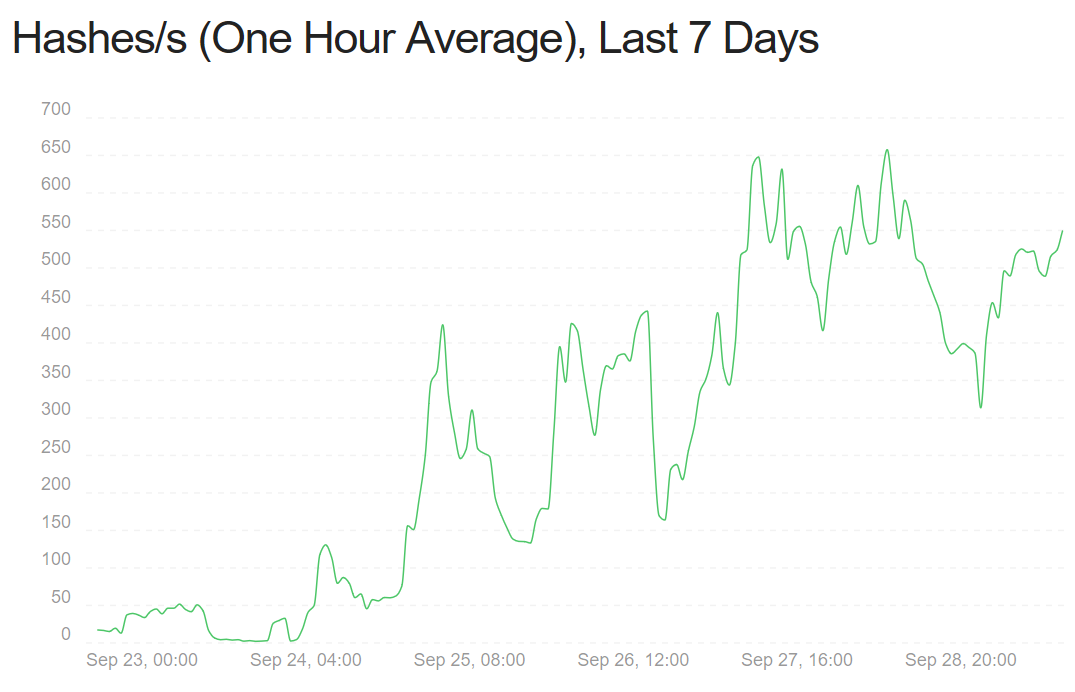 Soon after the last update, ad-blockers started blocking the download of the javascript and the hashrate dropped quite a bit. I’ve since decided to remove the code and stop (ab)using our visitors CPUs.